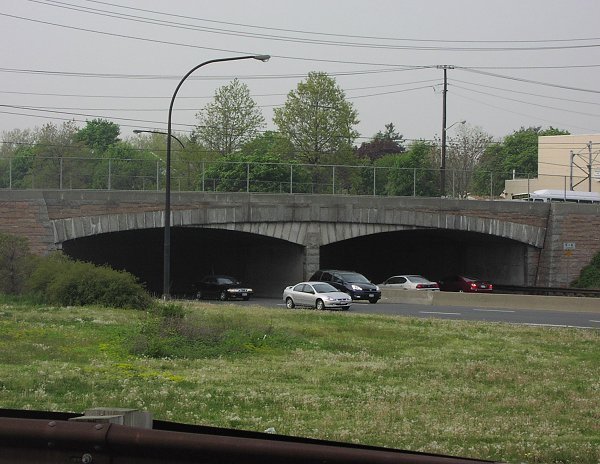 Close-up of one of the distinctive stone face arched overpasses typical of the 1950's era Meadowbrook Parkway. This one carries Old Country Road, one of Long Island's major east-west thoroughfares, starting an enviable eastward run from the northern fringe of neighboring Garden City.
My most indelible image of Old Country Road stems from early childhood and it is of what used to be its signature Westinghouse AK10 "Cup Light" pendant type street lights, hanging from the same elliptical mast arms as the one currently attached to the utility pole positioned over the right side overpass archway, now holding the more modern snake-head type luminaire. I think for most of my formative years, it was precisely Old Country Road that came to mind whenever I thought of those lamps. What can I say; I don't refer to myself as the streetlight nut for nothing.
Not too far to the west of here, Old Country runs past the heart and lungs of Nassau County, where the main civic complex resides, including the main courts, which everyone refers to as Mineola when in fact they are all within Garden City. Does Mineola just rent the distinction?
The Meadowbrook Parkway overpasses, being of the 1950's Long Island Expressway generation rather than its 1920's era parents, the Northern and Southern State Parkways, display a rather bold, dashing look of motion and modernism, where those of the older two parkways kept to strictly classical stone bridge styling. The recessed cut above its center retaining wall was typical of the far less adorned older bridges that once predominated on the Long Island Expressway, but have been largely replaced by newer structures over the past few years. These spans also share design similarities with their Cross Bronx contemporaries. 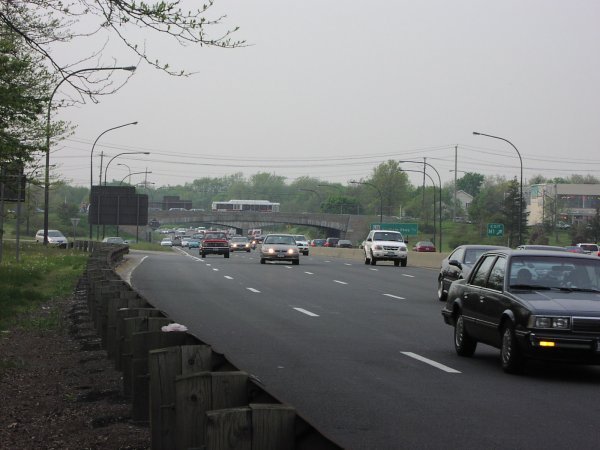 Looking north on the Meadowbrook Parkway towards Old Country Road from further back along the acceleration lane of the Exit M1 southbound entrance. How come the exits are always named for the exit, and not for the entrance? What else would I call this particular ramp, which being as level as the road it leads to, isn't really a ramp either? Entrance M1 southbound? Why do we give such honor to the ending of things, like the exiting from a highway, instead of their beginning, like getting onto one? Are the entrance lanes even officially under the exit complex umbrella? Does anyone other than I even care?
The Meadowbrook Parkway, unlike the older parkways, and not a few expressways as well, generally has well designed entrances, with liberal acceleration lanes that give you room to safely merge into the main roadway, but this benefit is conditional on your being able to use the outer lanes of the cloverleaf complex that most Meadowbrook Parkway interchanges are patterned after. To get either on or off the Meadowbrook Parkway on the circular ramps comprising the inner half of each cloverleaf, you still have to negotiate a sharp circular curve that leaves little room for error.
Despite its late dating, the Meadowbrook originally had the same rustic woodie type lampposts that the older parkways carried well into the 1980's, and in many case, the 1990's. Most of the Meadowbrook Parkway now sports these giant davit type poles that I, in my typical manner, nicknamed the snakes. The southernmost section, however, leading into both the Loop Parkway and Jones Beach, now has brand new retro woodies with brand new retro "Gumball" pendant luminaires. Help!
This section is in what's known as Carle Place. I've never known anyone who lived in Carle Place, and truth be told, I'm not sure anyone does. I think Carle Place is unique in only having stores and shopping malls as residents. I think the Meadowbrook Parkway right-of-way makes up, or takes away if you see it in those terms, more than half of Carle Place.