Peek-a-boo, I see you. Spying on a semi, if not fully abandoned railroad spur, that despite its lowly status as a rail line does boast a fairly decent, if not impressive, overpass over the Meadowbrook Parkway. I guess in the heady 1950's, this little spur must have been quite active. The spur comes to an abrupt end only a couple of blocks and several head of geese southwest of here, or off stage to the right. The ramp winding down in the foreground is carrying northbound traffic, or at least does when I'm not there to shoot it, from eastbound Zeckendorf Boulevard, where I was standing. 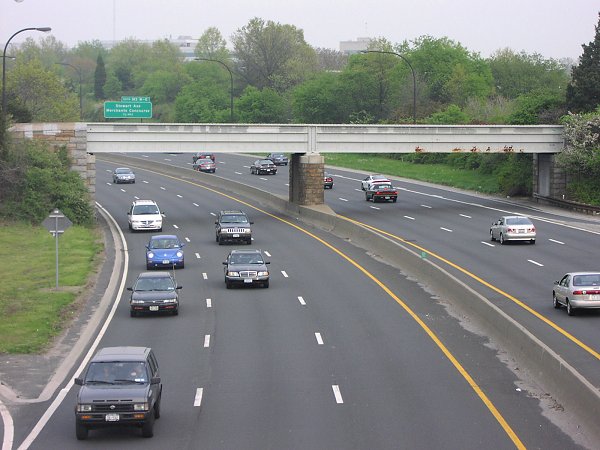 Notice the shady patches of darker gray on the girders spanning the railroad bridge? I think those are spots where graffiti was painted over. Personally, I think graffiti vandals should have their hands cut off, but I'd settle for having them caned, or similarly dealt with. The only thing human garbage who care about nobody else but their own gratification understand is humiliation.

Looking east on Zeckendorf Boulevard at the Long Island Railroad spur crossing. Two old railroad crossing signs present, the older X-bar type from days of yore and the more modern, if the word modern can be used at all, round sign from the slightly less than yore days. The round sign looks as though it faded, since these signs are usually yellow. Don't let the truck trailers fool you; that red building is not Fortunoff.
Fortunoff was a somewhat upscale department store about a mile or so to the northeast on Old Country Road. Back in 1973, my best friend and I were there with his mother, who was buying him a Japanese pinball machine called Pachinko for his junior high graduation. They were somewhat the rage back then, sort of like Cabbage Patch dolls would be a decade later and Talking Elmo a decade after that, but not quite the cult-style lunacy engendered by Pokemon. What can I tell you - back in 1973 we didn't have Grand Theft Auto or Vice City. Magnavox had only just released the original TV based video game console Odyssey; anybody remember the plastic screen and the primitive ping pong game? I loved that ping pong game. Kids today don't know what's good.
Anywho, we're ready to leave, having picked up Pachinko in the service area, when we realize we'd need an AC adapter to enjoy the lights and bells and whistles, etc. His mother sends us back upstairs with some cash to get the adapter, while she carts the machine out to the lobby. We're coming down the escalator with the thing and shout down to her that we didn't have enough money to pay for it. She apparently didn't understand us through the din of the noisy store, and yelled back to us that whatever she was yelling about had been taken care of already. We apparently didn't understand her either, because we took whatever she said, or we thought she said, or she thought she said or we said, to mean that she had paid for the adapter already. We walked out with the adapter and weren't two feet beyond the building when two security guards nab us. No amount of explaining or arguing from his mother sufficed. Never mind that she had just paid for a stupid Pachinko machine that cost 12 times the AC adapter. The two guards, Richie and Steve were their names and I'll never forget them, kept us detained in what Fortunoff called "The Yellow Room" for at least an hour, probably more. Of course they threatened arrest and whatnot. I didn't make matters easier by getting a little wise with them, threatening to sue. One of them asked what I was, "A Philadelphia lawyer?" It was the first I knew of any special relationship between lawyers and Philadelphia. I still don't know where all that started.
Finally we were released; why I don't remember, but I know that plenty of unpleasantries passed between the store officials and my friend's mother. We did come back with the Pachinko machine but my buddy never did get the AC adapter for it. It dinged regardless, but we never got to see it light up. From that moment on, for years, and still at times today, the mere mention of yellow, Philadelphia, or Fortunoff, evoked cackles and inside jokes between us. That incident completely warped me. It wasn't my first unnerving experience from that store either. Five years prior I fell horribly ill with a virus the night following a trip there and that entire night was dominated by endless nauseating dreams of bright fluorescent lights and blue and white Delft dishes from the last section of the store we'd passed through before leaving. If anything got me sick that night, it was probably the Chinese restaurant we ate at after leaving Fortunoff, but visions of those dishes were what made my world spin out of control.
Shot early May, 2003.