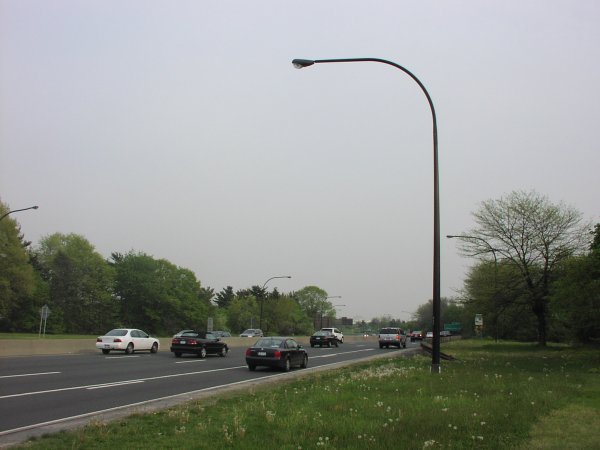 Looking south along the Meadowbrook Parkway, between Exits M1 and M2 in Carle Place, Long Island, New York. Unseen to the right are the parking fields and garages of the massive, pioneering Roosevelt Field shopping center and mall, which dates from the 1950s when such mega malls were almost non-existent. Directly alongside this section, behind the parking facilities, are, or were as of 2003, the decidedly upscale Nordstrom's and Bloomingdale's department stores.

One of sadder phenomena of recent years is the roadside memorial marking the spot where someone, or more than one, perished in an automotive accident. Most of these ad hock monuments sprout up at dangerous crosswalks, mostly mourning a pedestrian struck down crossing the street, but the careful eye will spot them here and there along the highways, where more than likely a multiple vehicle wreck occurred.

It would seem that one of the prerequisites for applying for the job of being a parkway is that you have a lot of curves, so if parkways were people, they'd probably have to be good looking women, or at least women in good shape.
I suppose they used wooden supports to hold the steel guardrails along the shoulder to enhance the illusion of a rustic, bucolic nature, but given that the rails are very noticeably steel, the effort seems a bit ludicrous. 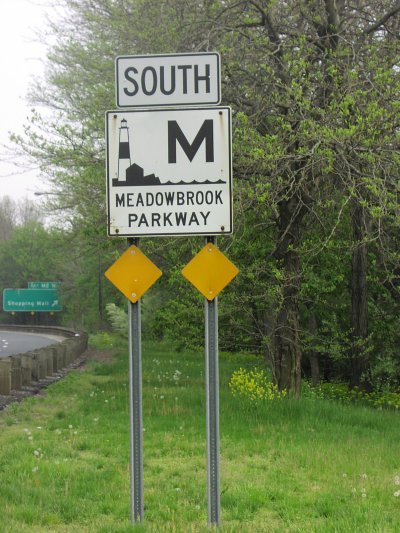 All Long Island parkways have their own distinctive identity signs, including those within Brooklyn and Queens. The Meadowbrook Parkway was originally slated to be called the Captree Parkway. Personally, I like the name Captree better. Meadowbrook is too long, whereas Captree is nice and short, and far easier to type. Why give a long name to a short parkway? And where the dad banged heck is the brook? For that matter, where exactly is the Meadow? Then again, what exactly is a Captree? Who else even cares about these issues other than myself?
All taken early May 2003.