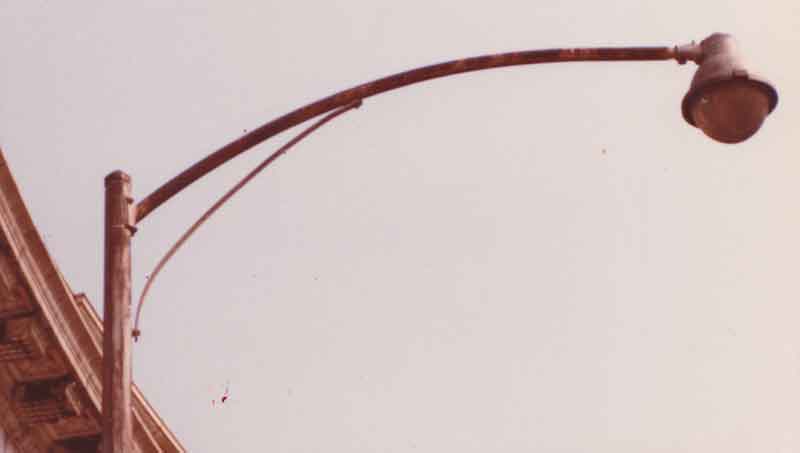 Until the 1950s, virtually all lampposts within New York City were elaborately decorated cast iron poles. The only exceptions were those hung from wooden utility poles, and the rare parkway woodie or steel Whitestone style poles deployed here and there on service roads serving an arterial parkway or expressway adorned with those styles.
The post war era, however, viewed elaborateness and untidy and old fashioned, not to mention expensive to maintain, as cast iron products tended to corrode easily. The forward oriented jet age demanded more modern looking street ware, and the precursor for this movement within New York City were the hexagonal shafted steel standards, fitted with these uplift style curved mast arms, which required stiffening braces beneath them. By the 1960s, most small towns had such poles, with varying lengths of mast arm, lining their main business streets. Within New York City, they first appeared as replacements for decayed cast irons, or road kills that were knocked down. By the end of the 1950s, however, after only a few years of proliferation, even these post war neophytes were getting edged out by more state of the art elliptical mast arms that required no bracing. By the late 1960s, the curved brace masts had already become a rarity within New York City, almost as much as the cast irons so many of them had replaced just a decade earlier. Maintenance costs are everything in the street lighting world. 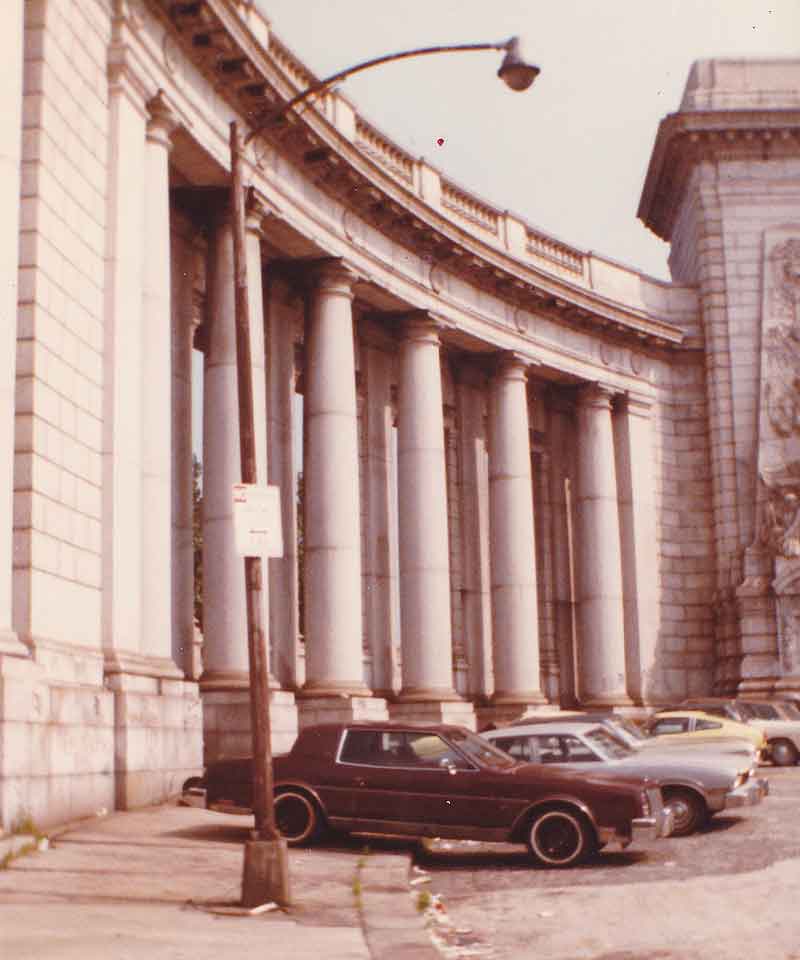 This particular hexagonal steel pole was rusting away, not aging much better than the easily corroded cast iron pole it undoubtedly replaced. It sported an incandescent Westinghouse pendant light fixture that I nicknamed the Cuplight. They first began to edge out the older Gumball and Bell shaped pendants in the immediate post war years of the late 1940s. During the 1950s, they were the kings of New York City luminaires, but ah, so short lived is the reign of such kings.
Heavy indeed was the crown on the head of the Cuplight. Even the fact that the basic model was capable of employing mercury vapor fluorescent bulbs, such as the last ones installed on early 1960s highways did, and many on Long Island still do to this day, New York City went on an extermination blitz throughout the 1960s, eradicating the Cups in favor of mercury vapor cobra head fixtures. And yes, the first generation cobra heads didn't enjoy their crown too long either, as sodium vapor cobras tossed them out wholesale in the early 1970s. Thus, on and on the endless tax dollars fly out the door as New York City quickly turns fickle on its latest street lighting fixtures.
The Cuplight remains my favorite street light fixture, probably because they adorned the street I grew up on until I reached Kindergarten.
Dig the boxy 1970s vintage cars parked along the side of the colonnade. I believe the brown car in front was a late 1970s Chrysler, from their worst crisis ridden era, just before Lee Iacocca delayed their eventual demise by over a decade by bringing out the mini van and the mechanically challenged K cars. The colonnade adorning the Manhattan Bridge Chinatown terminus is arguably much more elegant than the bridge. The lamp post has, or had, a sign warning someone not to do something. Wonder if it was warning against parking over there. Were all these cars towed away after I left?